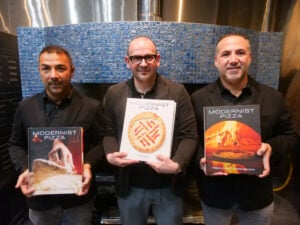 Guess who just turned four! Despite the pandemic and other unforeseen obstacles, we are proud to report that we’ve awarded 300 Pizzaiolo certifications since we opened our doors. We’ve worked diligently to promote the art of pizza-making and to make sure that it gets the respect that it deserves. In addition, we’ve enabled chefs, hobbyists, and restaurant owners alike the true strategies and tips that they need to survive and thrive in today’s marketplace.

During his opening remarks at the party, our Co-Founder and CEO, Francesco Marra, discussed how important the pizza industry has become in the United States in just over 100 years since the first pizzeria was opened in New York. Francesco mentioned that despite the enormous amount of revenue that the pizza industry produces annually, adequate pizza-making and pizza business education was missing. For this reason, he and his brother, Co-Founder Enzo Marra, continually aim to fill the educational gap while giving back to the community at the same time. 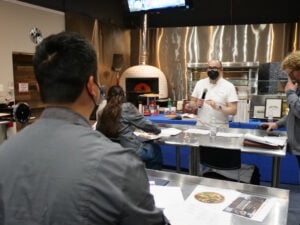 On July 13, we celebrated our fourth anniversary with a Meet and Greet event with celebrity chef Chef Francisco Migoya, the Head Chef at Modernist Cuisine, and author of the Modernist Pizza book series. Chef Francisco was also with us for a class on the different styles of Neapolitan pizza that he learned about and created while writing Modernist Pizza. His massive volume took a team of 25 people and 4 years to write, so like us, he had a good reason to celebrate too!

Chef Francisco Migoya, who  grew up in Mexico City, immersed in the cultures of his parents: American, Italian, and Spanish, thanked us for our efforts in elevating the status of pizza-making to the respected place it deserves in the professional kitchen. During his class, he taught hands-on techniques, recipes, and tricks, along with the history of Neapolitan pizza and how it became one of the most famous pizza styles in the world. Chef Francisco’s biography is as inspiring as his pizzas are. The flavors of his family’s cooking and of his neighborhood were integral to his life, encouraging an early love of cuisine. While attending the Centro de Estudios Superiores de San Angel University in Mexico City, he received a full scholarship to study gastronomy at the Lycée d’Hotellerie et de Tourisme in Strasbourg, France. After moving to New York in 1998 and working in savory kitchens, Migoya eventually answered a newspaper ad for a Pastry Cook position at The River Café in Brooklyn, where he immediately connected with the world of sweets. He then went on to work as the Pastry Chef at Veritas in New York City, the Executive Pastry Chef at both The French Laundry and Bouchon Bakery, and as a Professor at The Culinary Institute of America in Hyde Park, New York. 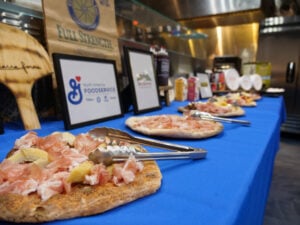 We were proud to host him for our 3-Day Intensive “Traditional, Modernist, and Neo-Neapolitan” Pizza Class from July 13th to July 15th.

Our anniversary party fare consisted of some of our favorite classic combinations, charcuterie boards, fruit and cheese platters, and an array of piping hot pies that ranged from sweet to savory. From the ubiquitous Margherita pizzas to those topped with thinly sliced Prosciutto and fantastic Grande cheeses, to chocolate dessert pizzas, everyone was pleasantly satisfied, even before we cut the cake!

Thank you to everyone who is a part of the Pizza University family. We appreciate our Instructors, Ambassadors, Team Members, Partners, and Patrons. Your support means everything to us.

Here’s to many more years to come! Viva la pizza!

Tags: Pizza University All You Need to Know
Back to Blog

5 Things You Should Know About Brick Ovens from Marra Forni

Detroit, Chicago, NY or Napoli? All You Need to Know About Pizza Styles

Not all pizza is created equal. Nowadays one of the world’s most beloved foods is offered in many...
Read More